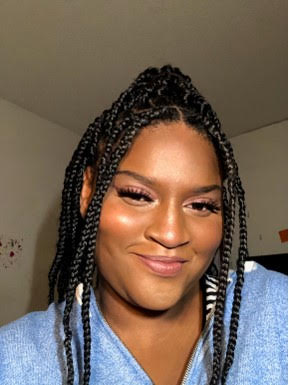 Grab your make-up brushes and sponges as this student built a foundation to become Student of the Month. Tania Adams, a senior at Page High School, became one of the two Students of the Month due to her love for makeup and her passion to grow as a makeup artist. When asked how she felt after knowing she was chosen for Student of the Month, Tania told “Pages by Page” that “it felt awkward but good, awkward because a lot of people don’t know about [her] being into makeup and [she] doesn’t really know how they would react, but good because [she is] being recognized for [her] work and the time [she] put into [her] skill.” This young makeup guru started her journey in 8th grade and started to become serious about it in her sophomore year of high school. With 255 posts, Tania gained 1074 followers throughout her journey.

To Tania, becoming a makeup guru means “to be someone who truly enjoys makeup and wants to spread their skills and talents with others.” As well as spreading her skills with others, Tania also believes that her skills could be an inspiration to future generations of children who would like to become makeup artists as well. To Tania, becoming an influencer can encourage kids all around to push past the limitations set on their lives and to chase their dreams, stating that “lots of kids are growing up believing they have to become certain things like doctors, teachers, and whatever because they’re not often challenged to push past the norm. That’s why [she] believes [she] can become an inspiration and why diversity is so needed. When someone sees another person on a screen that reflects them and what they like, they start to think ‘I can do that too.’”

Tania later revealed that “[she’s] wanted to be a content creator or a YouTuber [ever] since [she] was eight years old.” However, due to the lack of diversity in the media and in the makeup community, she feared that she wouldn’t fit in and that she’ll be out of place because of it. That never stopped her, and she kept persevering as she found role models such as Jackie Aina, Shalom Blac, and Beats by Deb. They helped her reach a new passion for makeup, as she believes that “they are paving the way of makeup for black women/girls.” Tania also listed some male makeup artists, such as Patrick Star, Khail Milan, and King Kiah who she believes is changing the game for men/boys who also have a love for make-up.